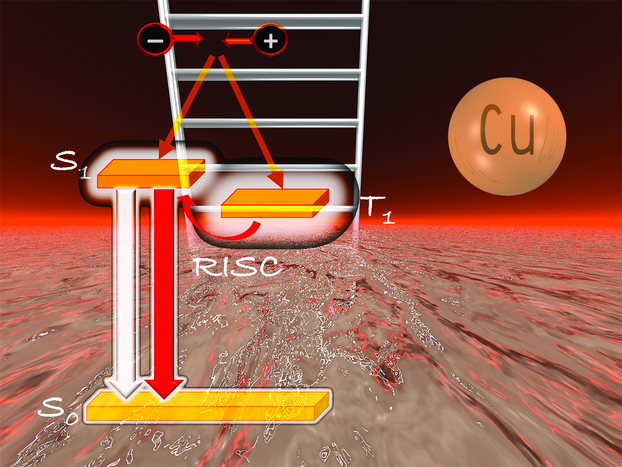 Over the last ten years, there has been growing interest in the development of luminescent heteroleptic copper(i) coordination compounds. These developments encompass both neutral compounds which may have applications in OLEDs and cationic complexes with potential use in either LECs or OLEDs. C. E. Housecrofts review has focused mainly on Cu-iTMCs, but also included neutral coordination compounds which were pivotal along the road to recognizing that heteroleptic Cu(i) complexes could exhibit TADF.

The last decade has seen a surge of interest in the emissive behaviour of copper(I) coordination compounds, both neutral compounds that may have applications in organic light-emitting doides (OLEDs) and copper-based ionic transition metal complexes (Cu-iTMCs) with potential use in light-emitting electrochemical cells (LECs). One of the most exciting features of copper(I) coordination compounds is their possibility to exhibit thermally activated delayed fluorescence (TADF) in which the energy separation of the excited singlet (S1) and excited triplet (T1) states is very small, permitting intersystem crossing (ISC) and reverse intersystem crossing (RISC) to occur at room temperature without the requirement for the large spin–orbit coupling inferred by the presence of a heavy metal such as iridium. In this review, we focus mainly in Cu-iTMCs, and illustrate how the field of luminescent compounds and those exhibiting TADF has developed. Copper(I) coordination compounds that class as Cu-iTMCs include those containing four-coordinate [Cu(P^P)(N^N)]+ (P^P = large-bite angle bisphosphane, and N^N is typically a diimine), [Cu(P)2(N^N)]+ (P = monodentate phosphane ligand), [Cu(P)(tripodal-N3)]+, [Cu(P)(N^N)(N)]+ (N = monodentate N-donor ligand), [Cu(P^P)(N^S)]+ (N^S = chelating N,S-donor ligand), [Cu(P^P)(P^S)]+ (P^S = chelating P,S-donor ligand), [Cu(P^P)(NHC)]+ (NHC = N-heterocyclic carbene) coordination domains, dinuclear complexes with P^P and N^N ligands, three-coordinate [Cu(N^N)(NHC)]+ and two-coordinate [Cu(N)(NHC)]+ complexes. We pay particular attention to solid-state structural features, e.g. π-stacking interactions and other inter-ligand interactions, which may impact on photoluminescence quantum yields. Where emissive Cu-iTMCs have been tested in LECs, we detail the device architectures, and this emphasizes differences which make it difficult to compare LEC performances from different investigations.