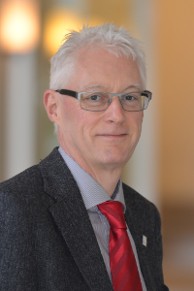 Edwin (Ed) Constable was born in Edinburgh (Scotland), but grew up in Hastings (England) where he completed his school studies. In 1974 he started his studies in chemistry at St. Catherine's College, University of Oxford, where in 1978 he obtained his BA in Chemistry. He completed his D.Phil at Linacre College, University of Oxford under the supervision of Professor Kenneth Seddon and at that time began a love-affair with ruthenium chemistry and photochemistry that continues to this day. He held a number of research fellowships at the University of Cambridge before being appointed to a University Lectureship and Fellowship of Robinson College in 1984. He remained at Cambridge until 1993 when he was appointed Professor of Inorganic Chemistry at the University of Basel (Switzerland). In 2000 he left Basel to take up a position as Professor of Chemistry at the University of Birmingham (England) where he was shortly appointed Head of School. He returned to the University of Basel as Professor of Chemistry in 2002.
He publishes widely in all areas of chemistry with over 600 peer-reviewed publications and is highly cited (20,800 citations, h-index 72). His interest cover all aspects of chemistry, chemical history and the communication of science.
He held an ERC Advanced Grant with his project "Li-Lo: Light-in, light-out".
He has been Dean of Research of the faculty of Natural Sciences at the University of Basel and was Vice-President of the University with responsibility for research 2011-2018. He is a member of the steering committee of the European Universities Association Council for Doctoral Education, the executive committee of the Swiss National Science Foundation and is a titular member of Division VIII of IUPAC.

He is a Fellow of the Royal Society of Chemistry.
He is or has been on the Editorial Boards of numerous journals, including Chemical Communications, Chemical Reviews, Chemical Society Reviews, Coordination Chemistry Reviews, New Journal of Chemistry, Polyhedron and Supramolecular Chemistry.
He is currently one of the editors in chief for "Comprehensive Coordination Chemistry III" to be published by Elsevier and is on the Management Board of the Open Access Publisher MDPI. He has recently been appointed Editor-in-Chief for a new open access journal "Chemistry – an International Journal".