Metal leads to the desired configuration 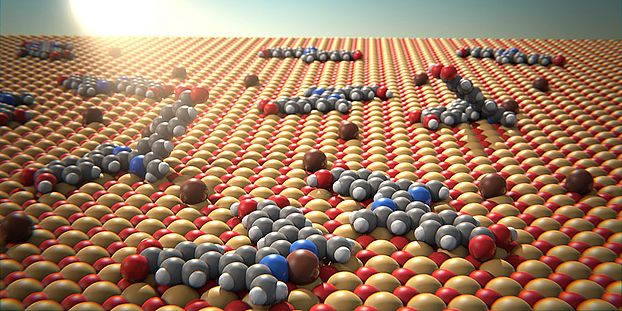 Scientists were able to determine the spatial arrangement of bipyridine molecules (gray) on a surface of nickel and oxygen atoms (yellow/red). Rotation changes the transconfiguration (front right) to a cis configuration (front left). (Image: University of Basel, Department of Physics)

Scientists at the University of Basel have found a way to change the spatial arrangement of bipyridine molecules on a surface. These potential components of dye-sensitized solar cells form complexes with metals and thereby alter their chemical conformation. The results of this interdisciplinary collaboration between chemists and physicists from Basel were recently published in the scientific journal ACS Omega.

The way in which the dye, which absorbs sunlight, is anchored to the semiconductor plays a crucial role in the effectiveness of these solar cells. However, the anchoring of the dyes on nickel oxide surfaces – which are particularly suitable for tandem dye-sensitized cells – is not yet sufficiently understood.

Over the course of an interdisciplinary collaboration, scientists from the Swiss Nanoscience Institute and the Departments of Physics and Chemistry at the University of Basel investigated how single bipyridine molecules bind to nickel oxide and gold surfaces.

Bipyridine crystals served as an anchor molecule for dye-sensitized cells on a semiconductor surface. This anchor binds the metal complexes, which in turn can then be used to bind the various dyes.

“The chemical composition of the cis and trans configuration is the same, but their spatial arrangement is very different. “The change in configuration can be clearly distinguished on the basis of scanning probe microscope measurements,” confirms experimental physicist Professor Ernst Meyer.

Metal complexes in a modified configuration

This change in spatial arrangement is the result of formation of a metal complex, as confirmed by the scientists through their examination of the bipyridine on a gold surface.

During the preparation of the dye-sensitized solar cells, these reactions take place in a solution. However, the examination of individual molecules and their behavior is only possible with the use of scanning probe microscopes in vacuum.

“This study allowed us to observe for the first time how molecules that are firmly bound to a surface change their configuration,” summarizes Meyer. ”This enables us to better understand how anchor molecules behave on nickel oxide surfaces.”