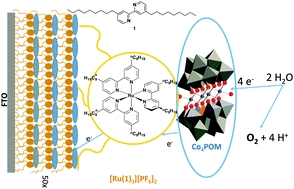 Fuel cells generate electrical energy through a chemical reaction of hydrogen and oxygen. To obtain clean energy, the splitting of water into its components of hydrogen and oxygen is critical. Researchers at the University of Basel study how sunlight can be used for this purpose. The scientific journal Chemical Communications published their latest results.

Developing clean and renewable sources of energy is one of the greatest challenges of our civilization. Artificial photosynthesis is one of the most promising approaches. This is when water is photo-electrochemically with the aid of sunlight separated into its components H₂ and O₂ and stored. When the chemical elements are later combined, electrical energy can be created. A team of researchers led by the University of Basel chemists Catherine Housecroft and Edwin Constable are working together with the Swiss Federal Laboratories for Materials Science and Technology (Empa) to implement this method.

The process of splitting water (H₂O) consists of two partial reactions, which are implemented with the help of different catalysts: water oxidation (which produces O₂) and water reduction (which produces H₂). The first is the more challenging of the two reactions, which is why research puts so much effort into the development of efficient and sustainable water oxidation catalysts.

An important factor in creating photo-electrochemical fuel cells is the precise arrangement of the individual components. "If you don't do this, it's like throwing all the different parts of a clock into a bag, giving it a shake and then hoping it will be possible to tell the time," explains Prof. Edwin Constable from the University of Basel.

To determine the perfect arrangement of the catalysts, the Basel-based chemists developed a water oxidation model in their current study which, although powered by electricity, generates the same chemical intermediate states as light. To accomplish this, they used compounds of the chemical element ruthenium as a catalyst. The critical feature is the self-assembly of the individual components in a hierarchical structure. The researchers thus succeeded in simulating fuel cells powered by light radiation. This model allowed them to test the position and efficiency of the individual components.